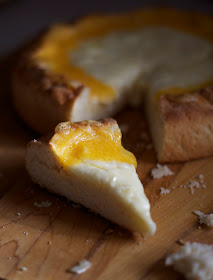 I love when improvising in the kitchen leads to the discovery of a great recipe. And I love it even more when it isn't even me doing the improvising but I still get to enjoy the great recipe that resulted from it. This recipe comes from our friend Ben, who is a wonderful cook. He had made a batch of some English muffin bread and only had one loaf pan available to cook it in. He decided to cook the second half of the bread in an 8" springform pan. That happy accident made the perfect base for a brie boat, which is basically a hollowed out bread bowl with melted brie inside. If any of you have had melted brie before, you know it's up there with whipped cream and cream cheese as dairy foods that just shouldn't exist they are so sinfully good. I'm not sure where the boat part of the name comes from, but it's one of my favorite parts of the recipe. I just imagine sailing in a sea of brie.

Once the bread is made, it's a breeze to put together, plus you get to practice your carving skills when you hollow the bread out. 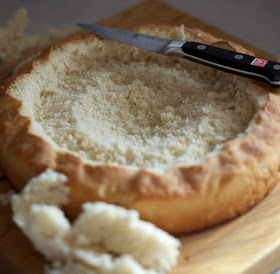 You can decide if you want to leave the white rind on the brie or not. I'm not a fan of it, so I cut it off. Cube the brie and scatter in the bread pit you just made. 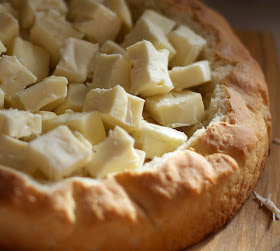 Bake until the cheese in melted, add some cheddar and bake some more and you're done! This recipe is great as an appetizer, side dish, (super bowl snack perhaps?) or whatever you can use as an excuse for making it. It tastes great by itself, dipped in pizza sauce, or even with a little red pepper jelly. 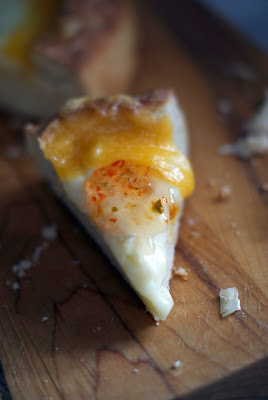 English Muffin Brie Boat
1/2 English Muffin Bread recipe, baked in a 8" springform pan or pie dish for about 20 minutes
8 oz wheel brie cheese
1/3 cup cheddar cheese, shredded
Pizza sauce for dipping
Cut out the center of the loaf to make a bowl. Do this by running the knife blade at about a 30 degree angle, pointed to the inside of the loaf, rotating the loaf until the top can be lifted out. Cut the brie into cubes and distribute within the bowl (remove the rind if desired). Bake for about 15 minutes at 350 degrees, or until the brie starts to bubble. Add the cheddar cheese to the top of the bread around the outside of the brie. Return to the oven and bake until the cheddar is melted and bubbling. Remove from the oven, allow to cool about 5 minutes. Cut and serve with side bowls of spaghetti sauce.
Recipe Source: ben-kt.momillett.org