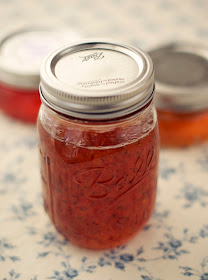 If you're anything like me before I tried pepper jelly, you are probably thinking it sounds really gross. What business do red pepper have in something like jelly? That job should be filled by fruits like strawberries and raspberries, maybe mixed berries for those adventurous folks. But red peppers? I wasn't so sure.

Well, this past Christmas when my husband and I were at my parents house there was a jam sampler that was given to my mom by a friend. Of course one of those jellies was red pepper jelly. (Otherwise this is going to be a very long tangent.) The great plague of Christmas 2010 hit our family a few days after Christmas and half of us were avoiding most foods for the better part of a week because we were worried they'd make a reappearance later in the day. New Years Eve rolled around and my ingenious mom, instead of slaving over a fancy meal that half of us wouldn't have enjoyed, decided to do things simple. We'd have crackers, cheese and all kinds of jam for dinner. Everyone could just eat whatever they could digest. It turned out to be a lot of fun making different combinations of crackers, cheese varieties and jam flavors.

Feeling brave, (I was mostly over the flu by this time) I tried out the red pepper jelly on a cracker with some cheese. And - no surprise here or this post wouldn't exist - it was really good. In fact, it was probably my favorite thing I ate that night. It was sweet and a little hot and on cheese it tasted somewhat like pepper jack. It was such a pleasant suprise. I've thought about it several times since flew back home and decided to make a batch of red pepper jelly myself. I'm sure they sell the stuff in stores, but that's not how I roll. Plus, specialty jellies are expensive and a red pepper is relatively cheap. Or at least that's what I tell myself when I feel the urge to cook something that could easily be bought. I searched through different recipes and decided on this one because it made a small batch, which means it's less cooking time, less money spent on ingredients and less sticky jam to clean off of everything in the kitchen since I cannot be neat when making jam. It still makes plenty to eat yourself or share with a friend, and freezes well if you don't feel like going through the trouble of canning it. I was happy when I tasted it and discovered that it is every bit as delicious as the jarred kind I first fell in love with on New Year's Eve. It's delicious on a cracker or triscuit with cheese or cream cheese, on toast, as a dipping sauce for chicken nuggets or a number of other things you'll be thinking up once you make this and become addicted to it. 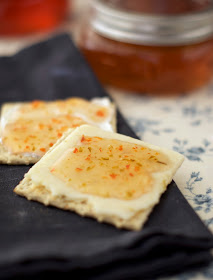 2. Combine pepper puree, sugar, and vinegar in a nonaluminum saucepan. Bring to a boil over medium-high heat, stirring constantly. Boil 3 minutes; stir in pectin and lime juice. Boil, stirring constantly, 1 minute. Remove from heat, and skim off foam with a metal spoon.

3. Pour into hot, sterilized jars, filling to 1/4 inch from top; wipe jar rims. (If you prefer, you can strain the jam through several layers of cheesecloth to make the jelly clear. You can also add a couple drops of red food coloring to make the color more intense.) Cover at once with metal lids, and screw on bands; cool. Store in refrigerator or freezer.