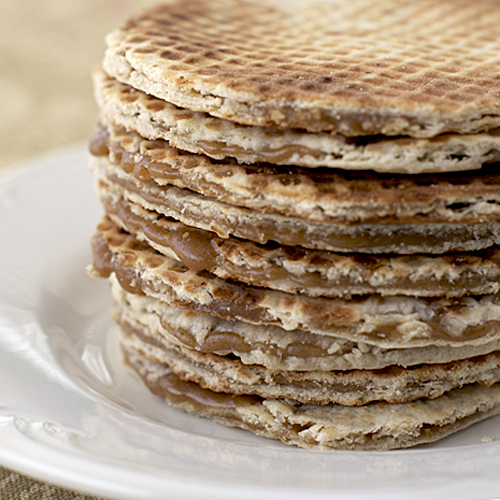 Last year on Black Friday I scored a waffle cone maker for $10. Well, I'm not actually sure whether to say that I scored or the store did, seeing how I had no need for a waffle cone but yet they still got me to spend $10. Also, for the record, it's not a very good waffle cone maker. The waffle surfaces cook unevenly and I can't figure out how they managed to make them out of plastic, but I swear they did. The outside of the iron heats up so hot that you need to wear oven mitts just to open and close it. It reminds me a little bit of the Cornballer from Arrested Development, for those of you familiar with that show. (Yo soy loco por los cornballs!)
Still, despite all the drawbacks of the waffle cone maker, homemade waffle cones are delicious and worth the effort to make them. I'll share my favorite recipe for them later in the summer, but for now I thought I'd share another recipe that I use the waffle cone maker for - stroopwafels.
Raise your hand if you've ever heard of stroopwafels before.
Me either, until I ran across this recipe. Now, I'm not Dutch, and I've never been to the Netherlands (Despite being obsessed with windmills, wooden shoes and my Dutch World Traveler Cabbage Patch doll when I was younger.) but word is that stroopwafels, or syrup waffles, are a common food over there. (Or so says the internet.) They are basically a thin, yeasted waffle that is sliced open immediately after baking and filled with warm cinnamon caramel syrup. When cooled, the outside is crispy and the inside is soft with a little bit of chewiness. Often people will set their stroopwafels on a cup of coffee to warm and soften while they read the morning paper or eat breakfast. It sounded pretty wonderful to me, so I pulled out the Cornballer, err, waffle cone maker, and gave it a try.
I wasn't disappointed. It's a slightly sweet, slightly buttery waffle cookie, with all the deliciousness of a homemade cinnamon caramel sandwiched inside. It's honestly something that I couldn't stop eating. If you have a waffle cone maker, bake these right now. You won't be sad. They're just delicious. For those of you who aren't lucky enough to own a fine waffle cone maker like mine, you can still make this entire recipe from scratch if you have a pizzelle iron, or opt for the easy option and buy premade waffle cookies (Trader Joe's has some nice ones that I've seen) and just fill them with the homemade cinnamon caramel. Either way, it's a win. 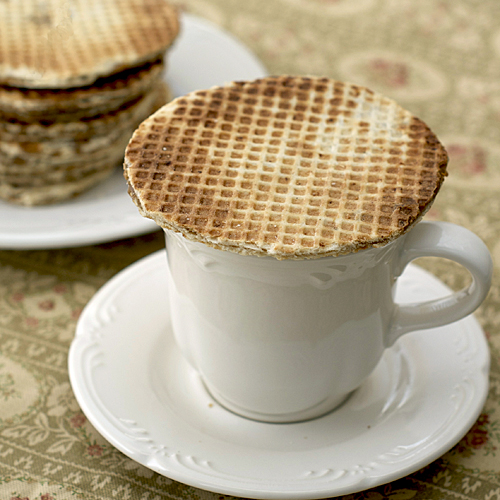 In a standing mixer fitted with a dough hook, mix the flour, yeast, cinnamon and sugar together. Using a pastry cutter or two kinves, cut in the butter until it resembles small pellets. Slowly pour in the warm water and stir the dough until it starts coming together, then add the eggs one at a time. Finally add the pinch of salt and knead the dough for a minute or two until it's nice and solid.

Cover and rest for 30 minutes.

Melt the sugar and the butter, stirring slowly over a low heat. Add the cinnamon and the pancake syrup and continue to stir until the caramel comes together and slowly bubbles. Keep stirring because at this stage it's easy to burn! Make sure all the sugar has dissolved and your caramel is nice and creamy (Do not try to lick it from the spoon because you'll burn your tongue!) then add the vanilla extract and blend it in. Keep the caramel warm.

Divide the dough into 20 equal pieces. It's easiest to weigh the total dough and divide by 20 but you can do it by size if you don't have a kitchen scale. Roll the pieces into small balls and cover with a damp cloth. You don't want them to dry out while you're baking.

Heat your waffle cone machine or your pizzelle iron according to instructions. Place one dough ball in the middle, press down the top lid and bake each waffle for approximately 40 seconds. (If your dough is too stiff, like mine was, you can roll it out with a rolling pin before cooking. Check to see if it's browned nicely and a little puffed up, remove it from the machine and place it on a flat surface.

Now you have to work fast. As long as the waffle cookie is hot, it's pliable. The moment it cools, it will break on you so make sure you have all the items you need within reach.

Place your hand on top of the cookie and slice it horizontally in two. (If it's too hot, use a pot holder). Since the yeast made the cookie puff up a little bit, this should be easy to do with a sharp, non-serrated knife. Place a generous size dollop of gooey caramel on top of the bottom cookie, replace the top part and gently push down on it so that the caramel spreads. Pick up carefully and put on a rack to cool off, and put the next dough ball in the waffle maker. You'll soon get the hang of it!

Many will cut the edges off the cookie so that it is a uniform and nice round shape. Doing this gives you the bonus of eating the scraps, but it's not necessary.